October, 1998. I was living in a cabin near the base of Mt. Yonah in North Georgia. Grandma Balkema and I kept in close contact with letters and phone calls. One day Grandma called to say she would like to fly down from Michigan for a visit. I was over-the-moon happy.   A few weeks later, I picked her up at the Atlanta airport, and we drove 100 miles up to the cabin in Sautee Nacoochee for her 5-day stay.

We had some great plans.  I couldn’t wait to take her to the nearby Alpine-like town of Helen, and show her Nora Mill Granary and Betty’s Country Store. Another highlight would be driving up to Hogg Pen Gap in the mountains at night, sitting on a blanket and looking for falling stars, one of our favorite things to do together.

That evening  it was a little chilly, and after giving Grandma a little tour of the cabin, we decided to start a fire in the fireplace.  I bounded out the front of the cabin to get some wood.

And twisted my ankle.

It was painful.  After awkwardly crawling my way back into the house, Grandma helped me prop the foot up and brought a pack of ice.  Then she cooked the supper that I had planned to cook for her, and we waited for my husband to get home. We took another long drive back towards Atlanta to an urgent care.   Thankfully, x-rays showed it wasn’t broken, but it was a severe sprain which required pain meds, ice and elevation. I was terribly disappointed that I couldn’t take Grandma out on all the outings we had planned.

That week she did most of the cooking, washed dishes, and even did a load or two of laundry. Near the end of our visit, we finally did a little sight-seeing, but she had to drive us around. She knew by then that life had many surprises, and she had learned to roll with them.  It ended up being a good time to talk together and hear stories from her childhood:

“The summer I was thirteen my world turned upside down, ” Grandma said.

“One day we heard a car come up the driveway. Being an only child on a farm in Oskaloosa, Iowa, visitors were certainly cause for excitement.”

She continued, “I ran to answer the door.  Standing on the porch was a tall young man, about 18, and a young woman who appeared to be in her early twenties. I could also see behind them another man, waiting in a car.”

The young man looked at me directly and said, ‘Hi Josephine!’

I was dumbfounded.  How did this stranger know my name?

He continued, ‘We are your brother and sister!’

“I started trembling all over,” Grandma said, with a little quaver in her voice. ” I had no idea what to do.  I left them standing at the door and went running up to my room.”

“Didn’t you know they were coming,” I asked, “didn’t they send a letter?”

“No.”  Grandma shook her head. “We had no idea they were planning to visit.  Usually I received a letter from them once a year, on my birthday.  Meanwhile, my mom heard the small commotion and came to the door.   She was also surprised, but quickly gained her composure, and invited all of them into the living room.”

“Grandma, you must have been so shocked!”   I couldn’t imagine how it would feel to have a brother and sister show up that you had never met.

“I was terrified.” Grandma said. “I believed they were coming to take me away from my mom and dad and would make me go to Michigan with them. I laid on my bed with my face in the pillow and just bawled.”

After inviting them in, my mom came upstairs and sat next to me on the bed. ‘What’s the matter?  Why are you crying so?’ she asked me.

‘I’m afraid they are going to take me away from you.’ I sobbed in her arms.

‘I promise you.  They are not going to take you away.  They only want to see you.’  She pulled up my chin to look in her eyes. ‘You will always be my girl, and you’re not going anywhere.’

It took me several minutes to compose myself, but eventually I walked downstairs to meet my dad, sister Anne, and brother John. It was the first time I met them since I was a baby. It was a little awkward at first, but eventually I felt more comfortable with them.

“How long did they stay?” I asked.

“Just for the day.  They took me for a ride in their car and out for a picnic.”

Grandma’s eyes twinkled. “I remember my brother John.  He was quite a jokester.  He made me laugh….

“But I’ll admit it.  I felt relieved when they left in their car and returned home to Kalamazoo!” 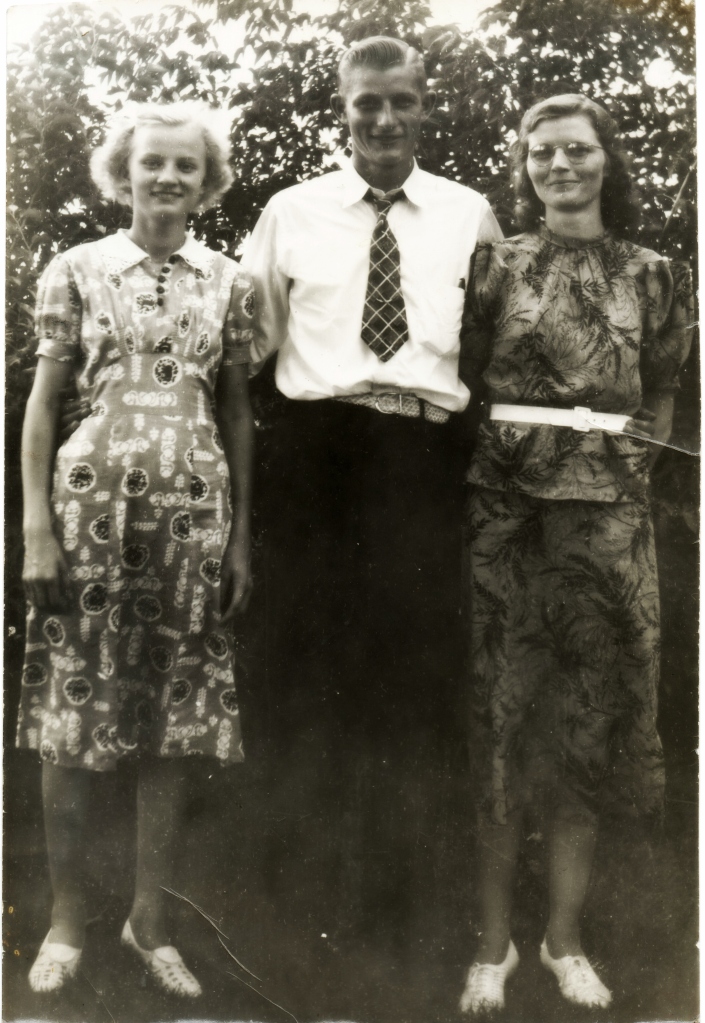 (R to L) Josephine, John and Anna VanDyk. We believe that this photo was taken approx. four years later, when Josephine went to visit her dad and siblings in Kalamazoo.

Grandma and I still had a good visit, with plenty of time to talk. If Grandma was disappointed, she didn’t show it.  She was only concerned that my ankle was mending. One evening while I watched from the nearby couch, Grandma showed me how to make fried apples.

honey or sugar, to sweeten (optional)

Melt butter in frying pan on medium heat.  Add apples, generously sprinkle with cinnamon and saute until soft.  Serve plain or with a scoop of ice cream.

Your comments are always welcome and appreciated!

A favorite memory of visiting with Grandma & Grandpa Balkema

A recipe for Olie Koeken