It’s Saturday morning. You wake up at 3:30 am in the middle of a hard Michigan winter.  You put on your mud boots, work pants and stiff flannel shirt, jump into your truck, and head out to the barn.  You set up the parlor for the day’s milking, and then walk up the snow-covered hill in the dark to fetch the cows.  It’s freezing cold, but you feel sheltered in the cow barn with the heat-radiating Holsteins.  After herding them down the alley  to the holding pen, you and your cousin methodically milk two hundred cows; one-by-one, over and over, opening and closing the gate, hooking up the hissing, sucking vacuuming machines to their udders, steaming in the morning cold.  While the machines whistle and click in unison, you warm your hands on the milk jar.

By eight o’clock when the rest of the world is waking up, the cows are milked and you’ve been on your feet for several hours. Working quickly, you chase the last few cows back to the barn. Then you scrape the parlor and hose it down.

Shall we go down to Grandma’s?

You nod and gratefully walk out the door and trek down to the farm house. You jog part of the way because your feet are freezing in your barn boots. You see light coming through mud room window.  Your stomach starts to growl.

You walk in the mud room and through the small window you see her bustling around the table.  There she is, your short, sturdy grandma with her white hair.  The smell of bacon warms you to your toes.

She smiles and waves you to come into the kitchen and ushers you to an empty spot at the table, where a few other cousins and farm workers are already eating. She loads the pancakes onto the platter in the middle of the table and pours you a fresh cup of milk.

Come on, take another pan-a-cake!  You must be hungry from working.

She has a way of bustling, almost jogging through the kitchen. Back and forth between the table, the griddle and the sink.  At eighty-five, Grandma is full of pep and happy to see you.

Words from a favorite hymn of Ada Vlietstra

The following are excerpts of an interview with Ada Vlietstra that I wrote for a college class in 2004.  At the time, she was 85 years old.

My grandmother, Ada Vlietstra was born in Kalamazoo, MI in 1919 to Dutch immigrants  Hendrik and Rikste (Engberts) Doorlag.  Her parents came to America through Ellis Island and Hendrik worked at the paper mill to earn money so that he could bring his parents to America as well.

As the second born of thirteen children and oldest daughter, Ada was expected to help her mother starting at a young age.  She helped with whatever chores she could handle and watched the younger children.  In those days they did not have kindergarten, so Ada started first grade at the age of 4.  She walked one mile to attend William Street Christian School.  When they were learning the alphabet, the teacher would write the letters with a piece of chalk on the top of their desks.  Then they would use dried corn and put it on the lines to help them learn each letter.

Ada graduated from 8th grade at age 13, and then took two years of high school.  At that time, the high school only went up to grade 10. If she wanted to finish her high school diploma, she would have to commute to a high school in Grand Rapids.  Just a few of her classmates did that.  At the age of 15, when she finished her schooling, her parents told her that she should get a job.  They did not have a phone in her house, and in those days people did not create resumes.  When she applied for a job at the Grace Corset Company, she had the company call her aunt and uncle’s home, who in turn told her parents. She was allowed to keep her wages for her own use. Her mother had twins during these years and she had a great deal of responsibility to care for younger siblings when she wasn’t working.

One Sunday afternoon, Ada and her cousin were walking home toward Paterson street, when a man named Fred pulled over and offered to give them a ride in his car.  (He later teased Grandma that she was hitchhiking, but apparently they agreed to ride with him after he introduced himself.) Ada, age 23, married Fred in 1942.  He was eleven years her senior. Ada said that in those days there would be a “shivaree” where they would try to take the bride away from the groom on the wedding night.

It was war time (World War II) when she was in her early twenties and there were many activities related to that.  She says they would have parades on Armistice Day and that people were more patriotic.  There were many jobs related to making parts of airplanes.  Fred did not go to war because the government felt it was more important for him to continue farming.

Her husband was dairy farming with his dad, and she moved into his family home on Ravine Road, which included Fred’s dad and sister. Fred’s mother had died at a young age. Ada remembers when she first moved into the house, it was a sometimes difficult to get along with her sister-in-law because she had run the home until Ada moved in.  That lasted for several months, but then her sister-in-law moved in with another sibling until she married. During those days Ada would have to wash the equipment/dishes for the milking barns and alternated doing this with another sister-in-law next door.  Ada did a great deal of canning and preparing food to last through the winter. They did not have any indoor plumbing in the house the first few years.

Ada and Fred became parents to six children.  While raising her own family, she also provided meals for her father-in-law, who lived in the same home with Ada and her husband until he died in 1960. 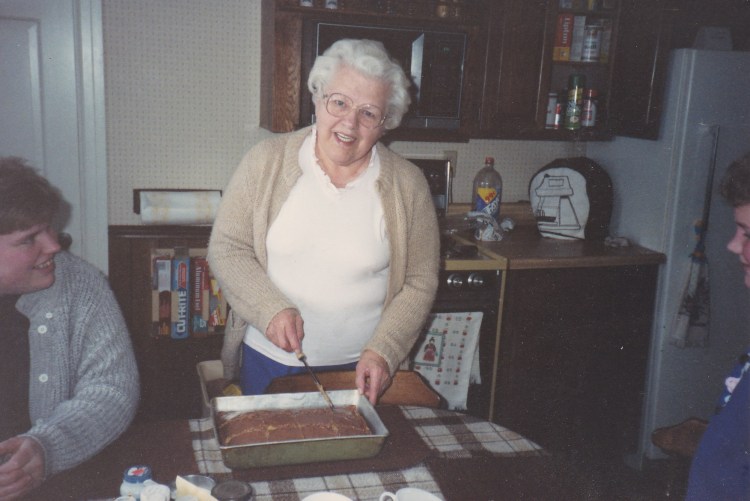 Stay tuned for part 2 of my interview with Ada where she shared more about her childhood and her life as a farmer’s wife.  I will also include favorite memories of my kind, hard-working and hospitable grandma, who lived to be 92 years old.

Thanks to my cousin, Sara VanDyk and my brother, Fred Vlietstra for helping me with details of the pancake story. I also added a few details from viewing a DVD interview of my grandparents by my aunt, Lois Ailes.

Your comments are always welcome.

11 thoughts on “Pan-a-cakes with Grandma Vlietstra”